I'm not dead and we're still trying to adopt

So my last post was all about yay! A contact but then she turned out to be working with multiple agencies.
BIG FUCKING DISAPPOINTMENT!
So instead of matching with her after texting for almost 2 weeks we said good-bye and good-luck.
So now it’s December, almost the end of it actually and I realize I’ve seriously neglected the blog.
We were featured in our friend’s blog post this month and for that we were extremely grateful.  She was lucky to adopt this year after an excruciating wait and for her to feature us and a few other friends still waiting was a blessing to all of us especially since she doesn’t update the blog often because you know new parent, work, and school. She’s quite busy and extremely happy to be.  I can’t express how thrilled I am for them, seriously even though we are still waiting it’s amazing to see our adoption friends become a family.
Christmas is upon us and I’ve been ready for a few weeks.  I called early in the month for gift ideas, made my choices and they’ve been delivered and wrapped beneath the tree for a couple weeks.  This year was an order, ship, wrap season.  I hope everything we got works for everyone but if not I tried my best with my limited knowledge.  Turns out we’ll be having 16 people for Christmas this year  (I thought we’d have 10 which is doable) and my @400sq ft is going to be stretched to the max.  You see our house is a 2 story so most of the upstairs is bedrooms/bathrooms/kitchen leaving about 400sq ft.  The basement which we turned into our living room is also about 400 sq ft so not much respite there.  If I had known we’d have so many folks I’d have suggested a restaurant banquet space so we’d all have room and seats.
What bums me out is I can’t cook us a Christmas dinner.  I mean I can but no one has a place to sit so I opted for appetizers this year.  I’m going to miss the family dinner. I love cooking for family and so this is a huge bummer for me; although I am still making my cheesecake (drunken cherry cheesecake) for dessert.  I refuse to give that up.  I’m also making my Pumpkin bread to share.
I find myself this season giving all kinds of positive reinforcement for others in our agency and it’s often not easy (seriously for how long we’ve been waiting this sucks not because they don’t deserve it but because we’ve been passed over so often! But I refuse to be a Debbie downer it’s not me) but you know I know it makes a difference. The waiting sucks!  Period! No matter if its 5 months or 5 years but the difference is those waiting 5 years are seriously thinking it’s about time to quit vs those who just signed up thinking it’s gonna happen anytime.  I remember those days and then watching those days slide past as others dreams came true.
I can only hope that our dream can come through before I say enough is enough.  I’m tired of the almost, the failed matches, the failed placements.  I try to keep the faith that our family is out there. Since our resent contact was contacting multiple agencies and therefore we didn’t match with her my faith is restored in our agency diligence but I wish it’d been before we’d been contacted. It’s the downside of open adoption.
I’m also disappointed in our other agency who called me after we opted for a small partial refund (thus ending our contract).  As soon as the check cleared our account we received a call asking if we’d entertain an EM due a month from now.  I was asleep and even my asleep self said No. You aren’t getting me to re-sign up after our failed placement.  If you had this mom you could have presented her before we said no thank you. I have no faith in them and I’m done but it doesn’t mean I don’t get upset saying No, or that I don’t cry with the possibility I just turned down because I do.  I get upset every single time!
Someday we hope to be parents but I hope it happens before we say no more as each year looms closer to the no children option. When May rolls around and we have to update our home study and FBI clearances I guess we’ll see where I’m at.  It’s not a cheap process and if you have not gotten leads it’s a discouragement and a why? I’m also bummed our social worker is retiring this month so we’ll be working with someone new next year.
I love our social worker and am so bummed she wasn’t/won’t be here to witness our family being built. She adopted her 4 kids and has shared such great stories; I’d really hoped she’d been in our corner but 4 almost 5 years in she’s retiring. I sent her a card I hope she’s received.  She can’t explain why we haven’t been chosen and then neither can we or our AC so you know we just plug along.
So that’s December – It’s an emotional mix of emotions and themes.
So here’s Our Christmas tree this year and some of the presents under it. 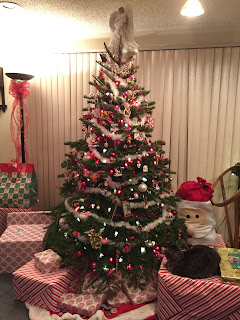 Posted by Don and Nicole's Adoption Journey at 12:22 AM No comments:

Don and Nicole's Adoption Journey
We're an animal loving couple with 2 dogs and 2 cats hoping to adopt a newborn domestically in an open adoption through Independent Adoption Center. We are excitedly waiting for the opportunity to be parents so please share our journey if you know anyone who might be considering adoption.

Check out our other pages for more Information