December was a Whirlwind and saying good-bye to 2014

So the New Year is upon us and I've been slack in writing as of late.

It’s been a whirlwind of holiday activity here since returning from California at the beginning of the month.  I honestly can’t believe how busy we've been with visits, gatherings, travel, and Christmas.
I flew to Atlanta the middle of the month to spend time with friends and we had a blast and the bonus was my friends from Tennessee were able to drive out for the day and ended up staying overnight.  Really had a fantastic time playing games, telling stories, and just relaxing in each other’s company. One couple was approved for Fostering up to 6 children and a couple days after I got home they had a full house.  I hope they had a fabulous Christmas with the kids. We couldn't be happier for you!

After coming home it was a scramble to get the gifts wrapped before Don came home from Atlanta and finish decorating.  That weekend was a “reunion” dinner for the folks who went to Ghana this year as a way to catch up and share food that the hosts felt resembled things they ate while there.  I have to say it was incredible. The 6 course meal was spectacular and the company even better.  I’d only met the hosts as I took their picture with the Ghana group at the airport before they all left, so I was a bit nervous heading to their home for dinner.  I had a great time; they are super people I wouldn't mind getting to know better.

The following day was a get together with our friends we haven’t seen in a few months. Lots of catching up, played a few games, and then so much fun watching the football game together that evening (which we won!).  Wish we could see them tomorrow but we’ll be with other friends and they will be with family.

The week of Christmas has arrived and Mom has Pneumonia so can’t bring my nephew to our house to stay a few days.  She also can’t come to Christmas Eve dinner. I plan to head down to pick up my nephew while mom revisits the doctor and hopes she isn't put in the hospital and Don went to help a coworker move into her new Condo. When he finished helping her move, he went to the mall to do some Christmas shopping and I must say he did a good job! Mom was given some different antibiotics and steroids to help her lungs/cough and was by her account feeling so much better by Christmas Eve, although she still didn't have much of a voice.  I even said “You sound horrible, how are you doing?” and she responded “I feel so much better! No, really, I don’t sound it but I do.” The only thing that saved her from a hospital stay was that she didn't have a fever.  I’m so glad she at least got to be home in her own bed to rest and I could keep her updated with texts. Our nephew immediately wanted to watch Guardians of the Galaxy when we got to our house.  I bring this up because about half way through he fell asleep and I took a picture.  It isn't often teens take naps but they should and my dogs joined in.  The rest of the time was spent playing with our board games, watching movies, and playing video games with uncle Don on my computer.  I've seen the future where I no longer get time on my computer LOL! Joking aside we really had a great couple days and are looking forward to his next visit. 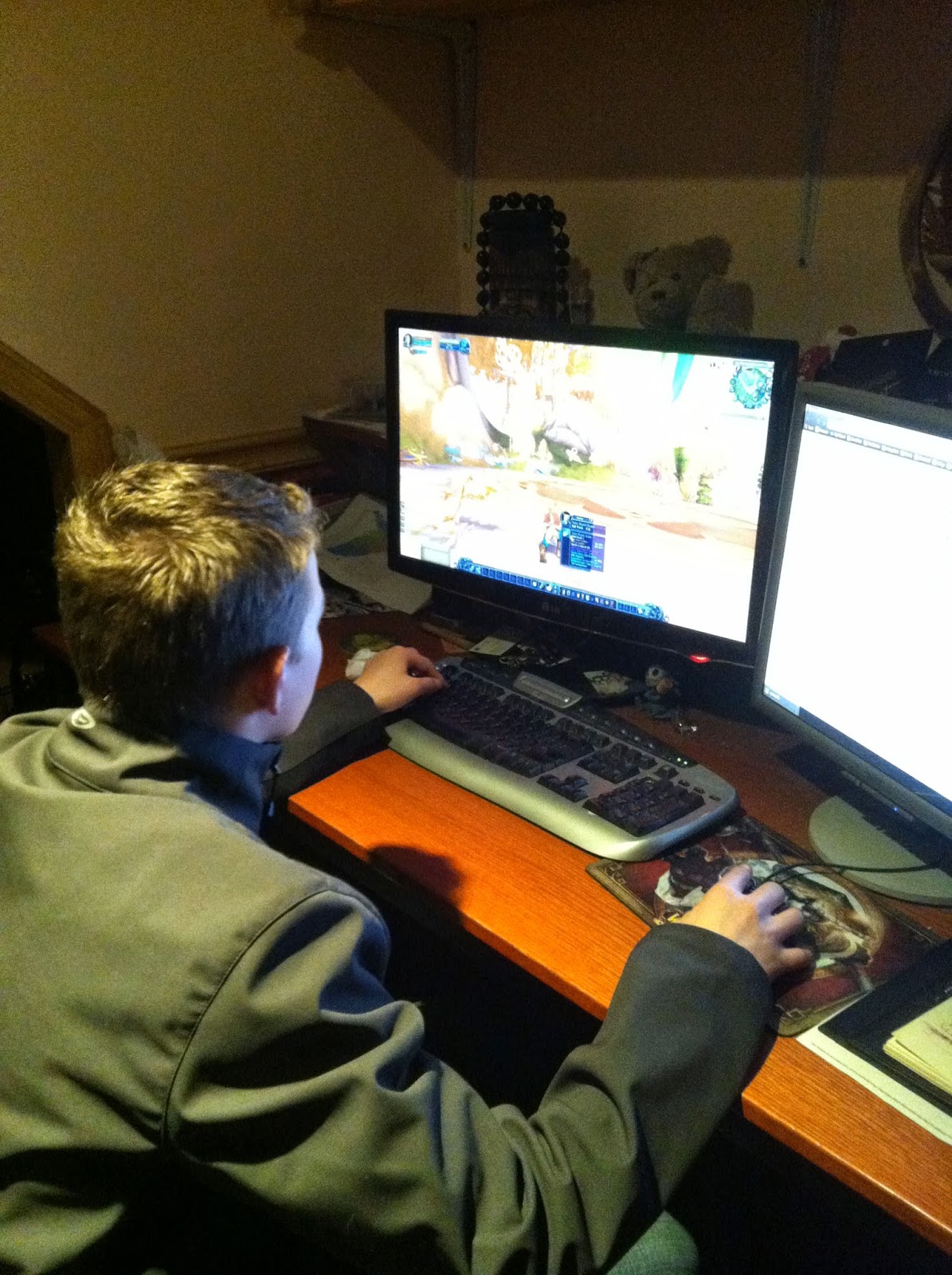 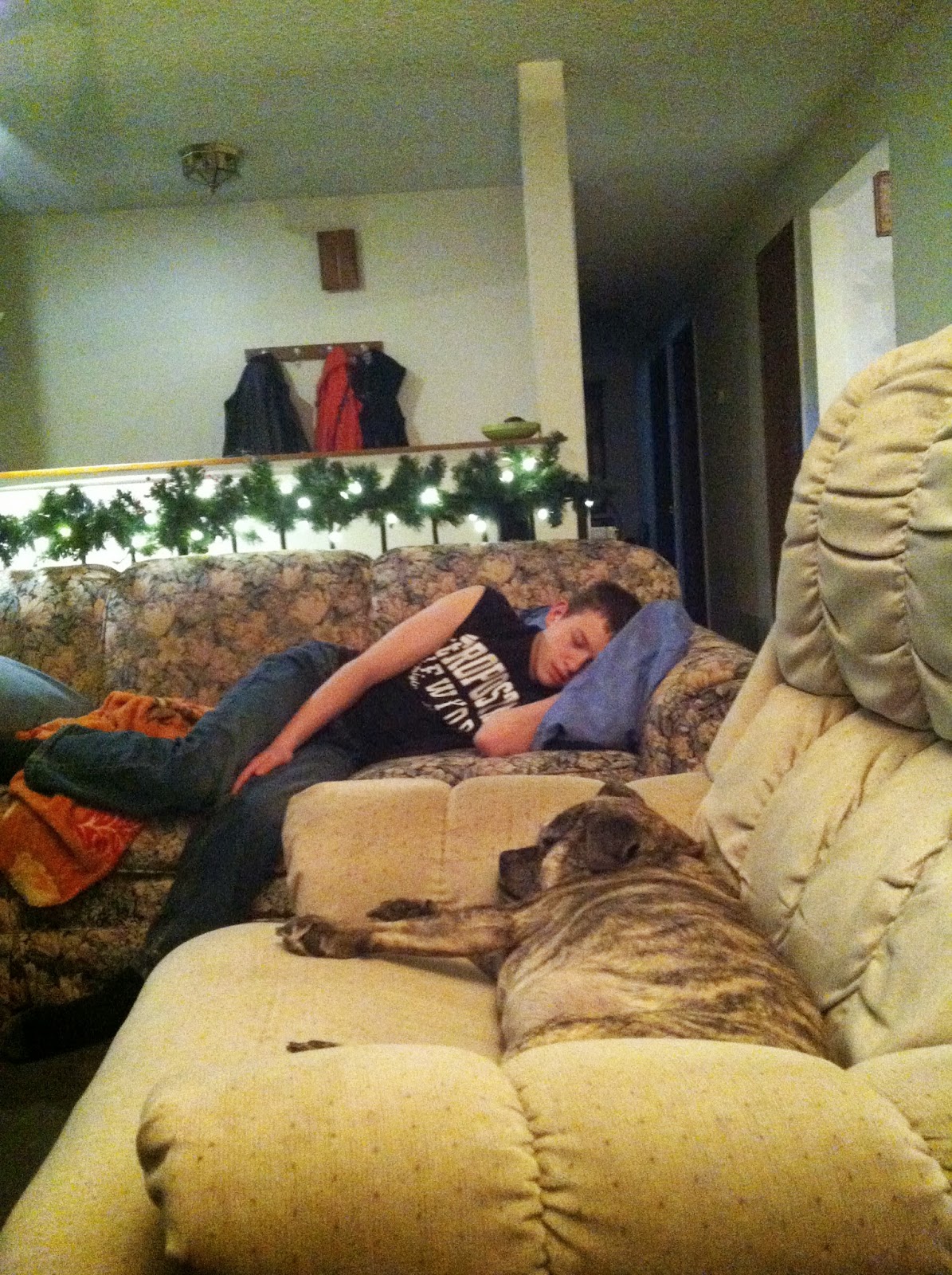 Christmas Eve was our day for Christmas with my family this year so my nephew could be home with his family for Christmas day.  I did most of the food prep the night before so it was a pretty seamless just put it all in the oven on time.  My mom’s husband was coming up so we waited for him to get off work and arrive which was killing Colin who was anxiously counting down to his arrival so he could open his gifts and get his stocking.  I remember those days; I really can’t wait until we have our own family to watch as they wake us early and want to dive right in. He was such a trooper as Tom was here for about an hour before we started exchanging gifts.  He was super anxious for me to find the gift he hid in the tree.  I wish I had pictures of his face as I walked to the opposite side of the tree to look for wrapping paper and he was commenting how it wasn't there.  Turns out he wrapped and hid the gift himself and he was pretty happy about it.  I’d say he did a great job as it took me a couple minutes to find it.  Once the gifts were done, Colin started playing his new game on Xbox while I finished our dinner. Tom would take him home later that evening. 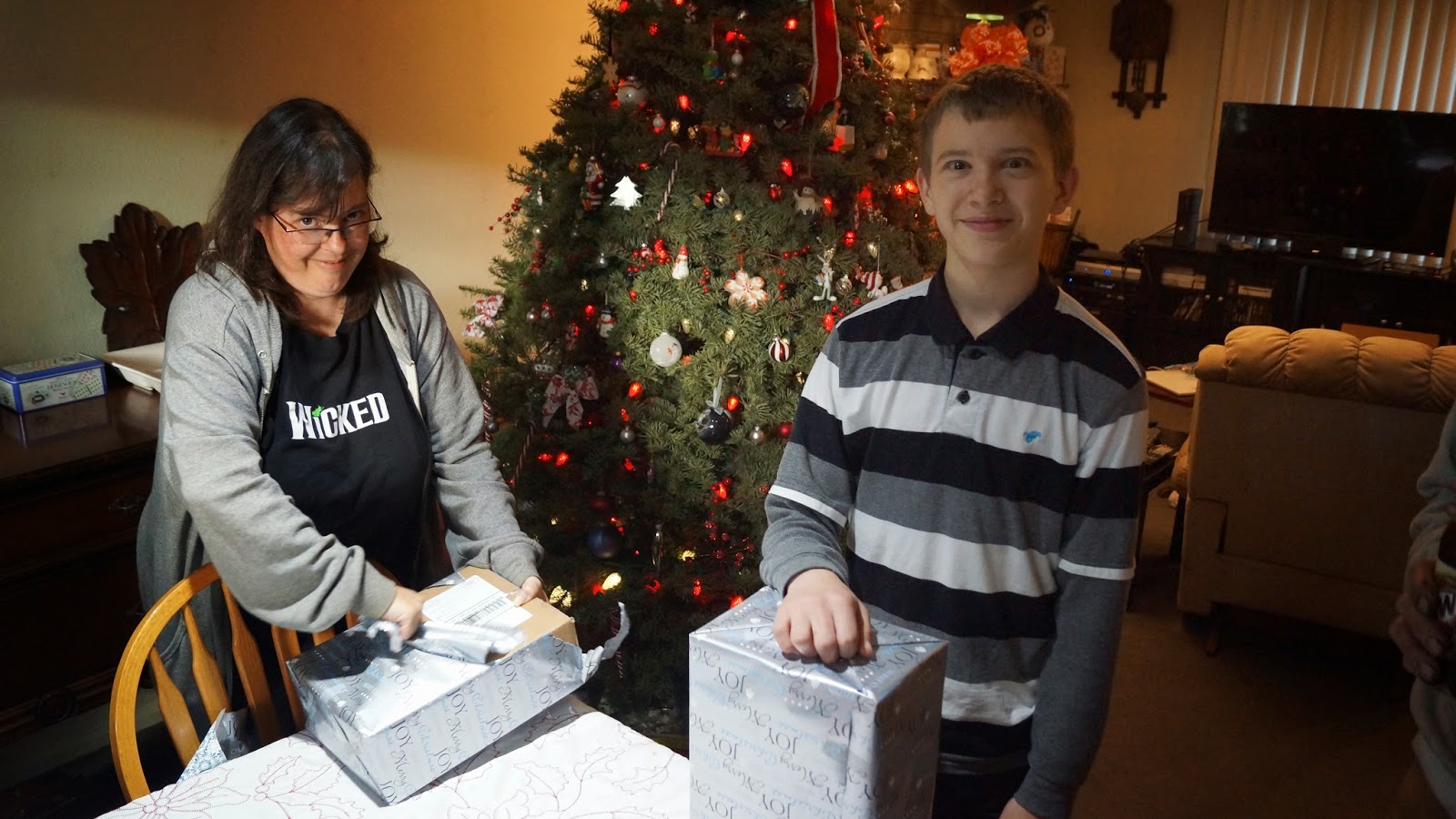 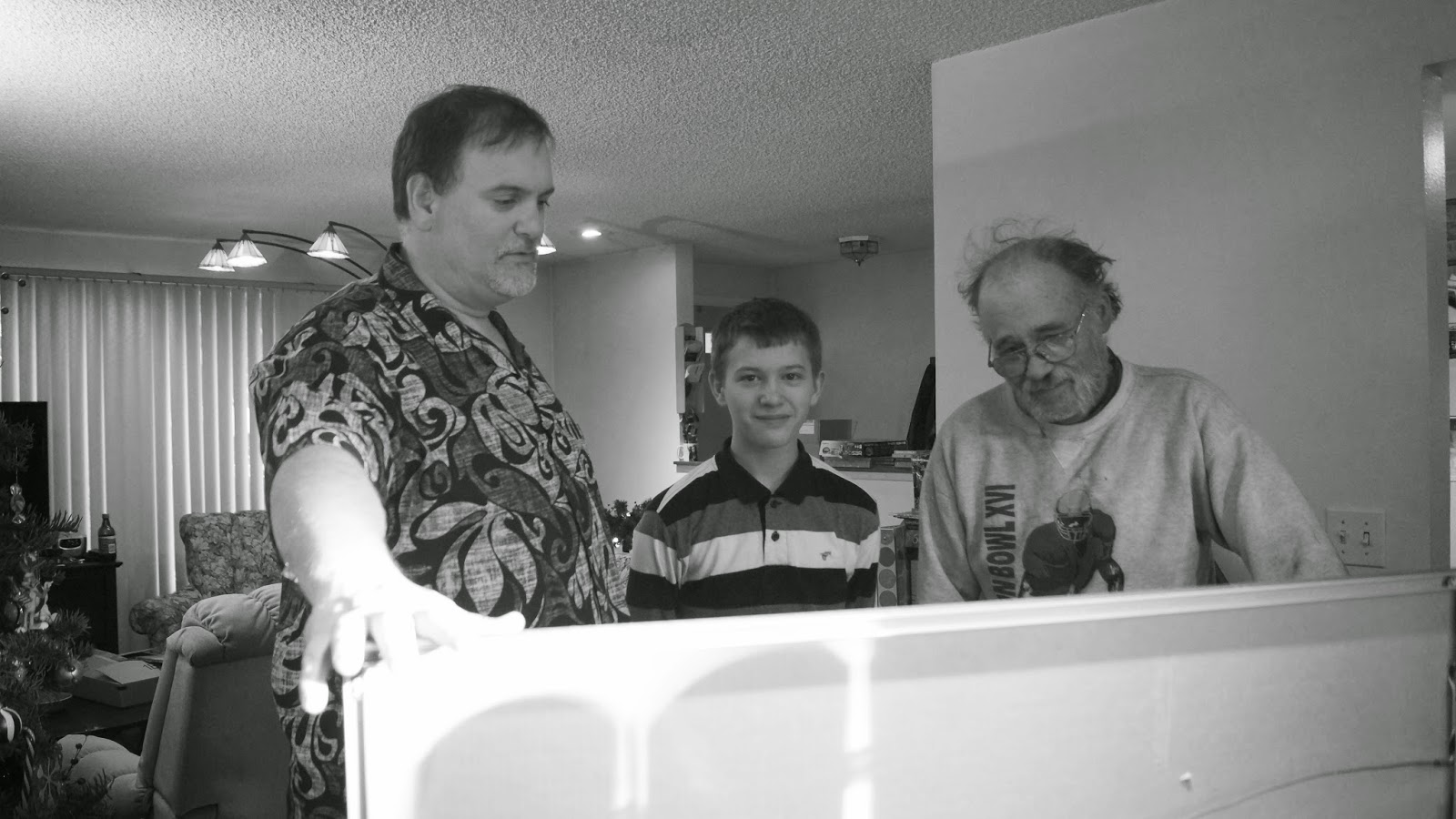 The following morning Don and I spent time just relaxing and talking to family.  We then planned to head over to his Sister’s house for dinner and we introduced them to Cards against Humanity.  They loved it.  It was a blast watching them play and then we fixed a non conventional dinner of steak, stuffed potatoes, crab legs, and broccoli.  It was so yummy and a refreshing change from the normal holiday foods we all typically serve.  Sadly she had to be up early to open the next day so we made it a fairly early night but not before she sent half a pie home with us because no one had room for it after dinner.

Fast forward and here we are on New Year’s Eve.  I can’t believe another year is about to pass.  We’ll be having dinner with a couple friends and then heading to a gathering of live music and food at their friends place to ring in 2015! Here’s hoping 2015 is even better than 2014 and that we all remember the importance of family, friends, and community.
Posted by Don and Nicole's Adoption Journey at 10:26 AM No comments:

Decorating for my Favorite Holiday

We’re back from our drive to California for Thanksgiving.  It was great to see our family and friends but so nice to be back home. The fun has started with Christmas right around the corner.  I already have my shopping done, just need to wrap what’s here and wait a couple more days for the remainder to arrive. I hope the kids enjoy the gifts from their wish lists this year.

On Sunday we went to the farm to get our tree and we normally get a 6-7 foot tree but not this year.  This year we picked out a HUGE 9-10 foot tree and cut the top and base.  It was extremely full with no holes in the foliage.  We just couldn't pass it up even knowing my angel tree topper wouldn't be going on top of the tree this year.  I even had to go out and buy more LED lights for the tree.
Decorating the house and tree make the holiday for me. Don moves the tree in and sets it up then leaves me to start decorating it. I can’t wait to share the decorating with our child. 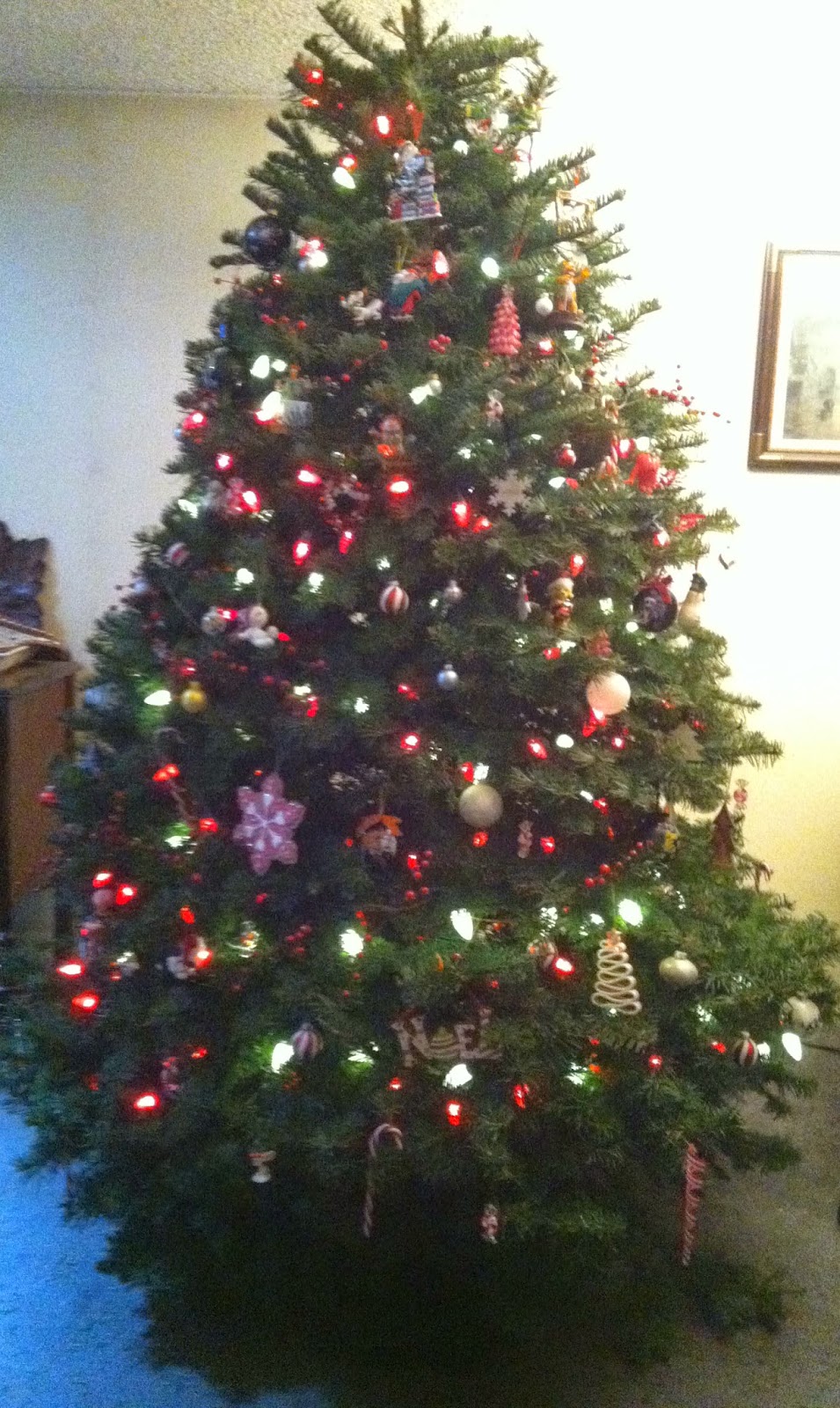 I love the smell of a natural tree in the house and the ornaments that bring back memories or new ones that I buy to remind me of the year.

The year we moved to Washington we spent Christmas in our apartment with his parent’s visiting. We had a small tree with few ornaments but Don did get me the M & M lights I really wanted and they still work to this day over 20 years later.  Christmas day would stick in my mind forever as he left the room after we opened gifts, only to get down on his knee and propose.  We've never looked back from that day on and it makes Christmas ever more special to me.

I’m still putting out the decorations this year and hope to get the outside lights done on Sunday.  We have rain slated for the next couple days, tapering off on Saturday so it should melt the ice on the roof so we can safely put the lights up. Saturday night we hope to go to Zoo Lights at Point Defiance Zoo and Aquarium. I’m super excited about the light displays this year and can’t wait to make new memories with our future child.

I need to finish the decorating and get down to our Christmas cards this week.  We got our first one in the mail today. It can be hard to sum up the year for the cards, especially when adopting and having no new news to share. Some folks are great with the year in review family newsletters and it just hasn't ever been my strong point.  I like adding just a small personal note to each card but may try the newsletter approach again. Time will tell which approach wins out this year.
Here are a few favorites to leave you with as I get back to decorating and listening to Christmas music.
Movies: White Christmas, Elf, Miracle on 34th St (original), A Christmas Carol (Patrick Stewart) and A Nightmare before Christmas 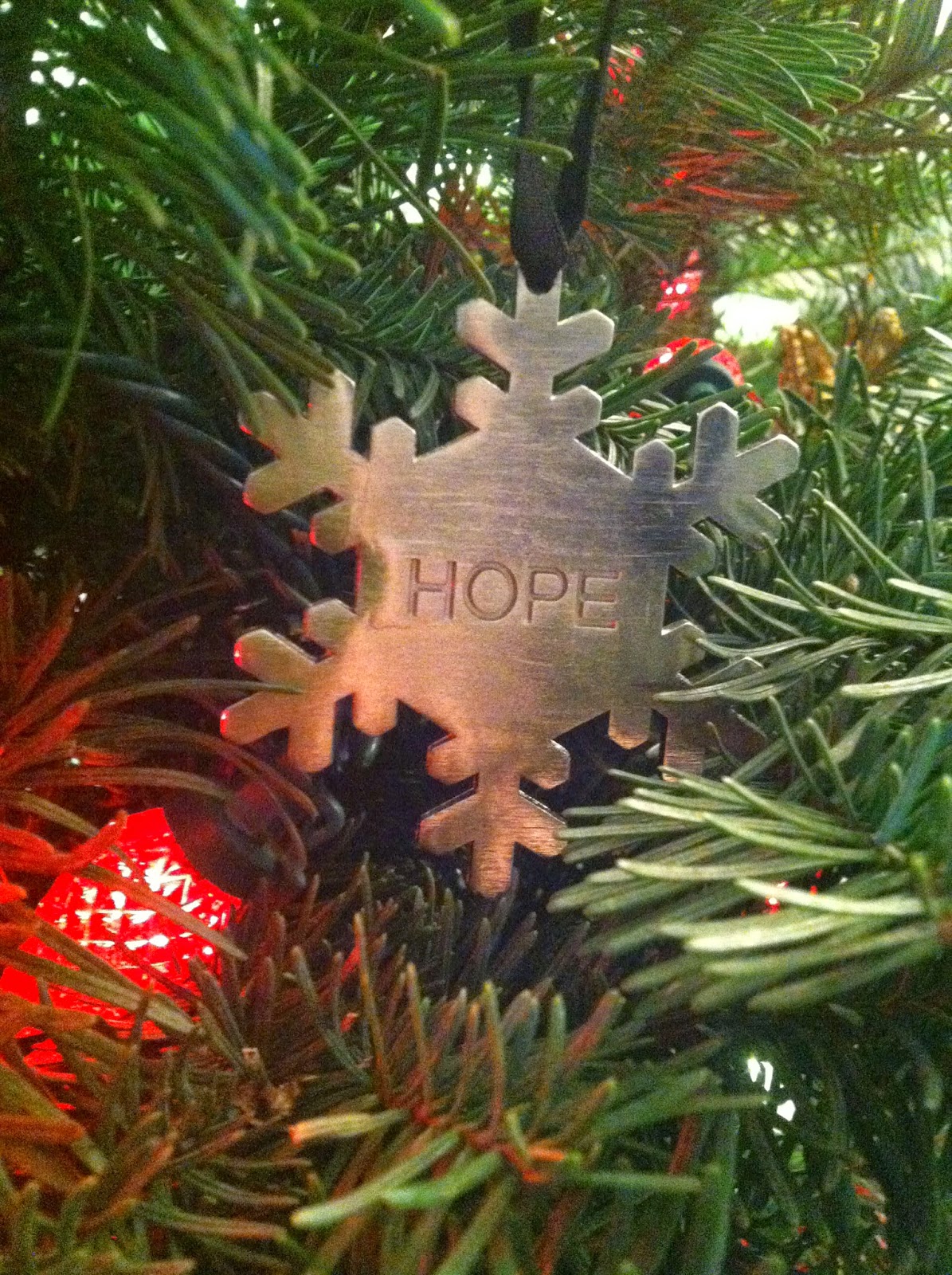 Posted by Don and Nicole's Adoption Journey at 4:30 PM No comments:

Don and Nicole's Adoption Journey
We're an animal loving couple with 2 dogs and 2 cats hoping to adopt a newborn domestically in an open adoption through Independent Adoption Center. We are excitedly waiting for the opportunity to be parents so please share our journey if you know anyone who might be considering adoption.

Check out our other pages for more Information